FASHION AND THE ENVIRONMENT Part 5 of 7

Before the industrial era, skilled artisans spun, wove and dyed fabric from their homes. They had the freedom to work when they chose and often the land to grow their own food as well.

The advent of the Industrial Revolution brought a change in the nature of work.  Employment was now centred in factories, which were located in urban areas. People moved from the country into towns and cities for jobs. Workers, mostly women and children, worked in appalling conditions, slaving 12 – 14 hours a day for a few pence. They were ill-fed, and housed, entire families to a single room, in unsanitary, crowded slums without access to running water. A single pump typically serviced a whole street.

General healthcare was unknown, and the mortality rate high. These sweatshops taint the image of the fashion industry to this day. 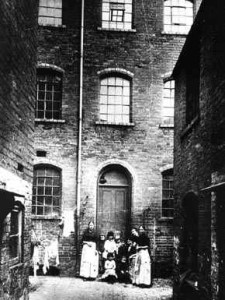 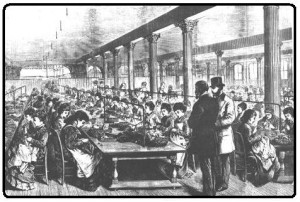 The sewing room in the department store of A.T. Stewart, Manhattan 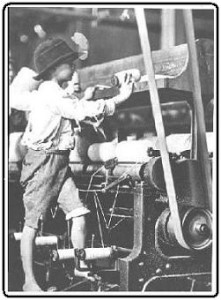 Child labour was widely used in the cotton mills

Unionisation and labour laws have greatly improved the lot of workers in the West, but wages in the clothing industry are still comparatively low. Furthermore it has become common practise for companies in developed countries such as the United States of America to have their product manufactured in developing countries where labour costs are lower, and workers have fewer rights. These (mostly Asian) countries include Indonesia, China, Taiwan, India, Thailand, Vietnam, Pakistan, Philippines, and Malaysia, and well-known brands Levi-Strauss, Guess? Clothing Co., Jantzen Inc., the Gap, and Nike, count among the outsourcing companies in the apparel industry.

Nike, in particular, have in the past been heavily criticized for unscrupulous labour practices in their overseas factories, inter alia the violation of minimum wage and overtime laws (in Vietnam, 1996), the use of child labour (Cambodia, 2001 ), forced labour (Malaysia, July 2008), and constant abuse by overseers (Indonesia, 2011).

The good news is that pressure groups are being formed to make these companies, and Nike is by no means the only guilty party, accountable for the welfare of these workers.While critics of the outsourcing system decry the loss of jobs in post-industrial countries, its advocates say that it in fact allows inhumane working conditions in developing countries to be exposed, and so eradicated. 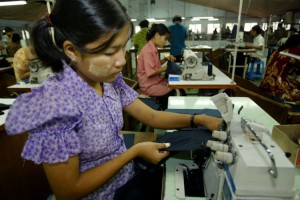 A girl stitches pants in a factory in Burma 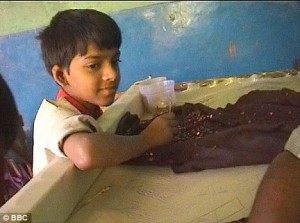 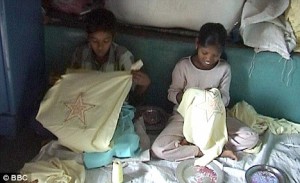 In South Africa the clothing industry is facing difficulties due in large part to cheap imports from China and other Eastern countries. In October 2011 the unprecedented step was taken by SACTWU (the South African Clothing and Textile Workers’ Union), to agree to the minimum wage for new entrants in the industry being lowered by around 30%, in an attempt to try and preserve jobs.
Another form of exploitation is underpaying for a product. A number of groups have sprung up to try and ensure fair trade for all, eventually culminating in the establishment of the international Fairtrade organization.

The sewing-room at A.T. Stewart’s, between Ninth and Tenth Streets, Broadway and Fourth Avenue [image]. (1875). Retrieved