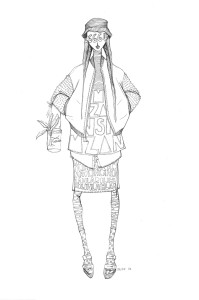 Elizabeth Galloway students Daisie Jo Grobler and Alexia Hechter were selected as finalists in the Nokia Asha A-list fashion competition, with Daisie Jo being one of the two eventual winners.

The competition was judged by esteemed Cape Town fashion designer Craig Native, and the winners have the chance of launching their own fashion collection worth R50 000, with him as personal mentor. Entrants had to submit a concept of their proposed range, according to one of four themes.

About the judging process, Native said, “The competition was tough. Anyone from the 8 had a clear cut chance. I reviewed the entries with much intensity. I decided to go for the 2 which I felt were “rough diamonds.” I want to give them an opportunity with the right infrastructure to see what they can deliver.”

Daisie Jo’s co-winner is Ntuthuko Manqele, and their prizes also included a Durban July Experience, as well as a Nokia Lumia device.

Well done Daisie Jo and Alexa, you’ve made us proud!