The new moon on Sunday the 29th of June signalled the start of the Islamic calendar month of Ramadan, commemorating the revelation of the Quran to the Prophet Muhammad.

During this period, devout Muslims fast during the hours between sunrise and sunset, abstaining even from drinking water. The purpose of this annual observance is to free the believer from bad habits acquired during the previous year, and to teach self-discipline, restraint, sacrifice, and empathy for those who are less fortunate. Actions of generosity are encouraged, together with compulsory charity (zakat).

Health benefits attributed to the fast include a reduction of cholesterol and blood glucose levels as well as blood pressure, and weight loss.

For me as a non-Muslim, the first indication of the approach of Ramadan is the appearance of dates on the supermarket shelves (dates are traditionally taken to break the daily fast).

Also noticeable are the increased numbers of women in headscarves out and about in the vicinity of fabric shops during the day, often carrying sleeping toddlers. This may be because new clothing is worn on Eid al-Fitr. In Cape Town, textile outlets such as Fabric City open on Sundays for the month of Ramadan. 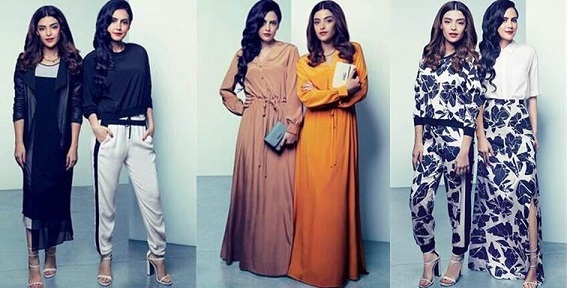 Some designs from the DKNY “Ramadan” collection

Responding to the demand, DKNY has just launched a line of stylish yet acceptably conservative fashions, suitable for wear during Ramadan. It was designed by Styles Magazine fashion editor Yada Golsharifi and Dubai-based designer Tamara Al Gabbani, and is available to women in the Middle East.

The Fashion industry sometimes finds application in surprising aspects of life, and is certainly not merely frivolous.

In the spirit of this month, we at Elizabeth Galloway wish all our Muslim friends and associates Ramadan Kareem.