FASHION AND THE ENVIRONMENT Part 1 of 7 A girl in blue jeans and a white cotton T-shirt: a wholesome, eco-friendly image, right?

Not really, I am afraid …

Growing the cotton to manufacture the average pair of jeans, consumes more than 6800 litres of water, and the average T-shirt, over 1500 litres.

The World Bank estimates that between 17 and 20% of the world’s industrial water pollution emanates from textile dying and treatment (which includes bleaching), and there are at least 72 harmful chemicals in our water which emanate solely from textile dying. 30 of these are deemed impossible to remove.

And dye is not the only pollutant released into water in the textile manufacturing process. Nonylphenol ethoxylates (NPE’s) are surfactants used in detergents, de-foaming agents, etc., which break down into substances with an estrogenic function when dissolved, and which can disrupt the endocrine systems of both humans and animals. Eventually they enter our food chain via fish.

Cotton needs to be sprayed against insects. More than 10% of the world’s pesticides and nearly 25% of its insecticides are used in the production of cotton. Every single T-shirt manufactured represents 150g of pesticides used on the crop.

Clothing is cheap and easily available, and thus expendable. It is estimated that for every UK consumer, 30kg of clothing and textiles per year goes to landfill. That adds up to a mountain of waste.

How is clothing produced so inexpensively? The key is outsourcing. Companies in developed countries where manufacturing costs are high, shift the actual production of goods to developing countries where labour (a large part of those costs) is cheap. In Asian countries such as India, Vietnam, and Thailand among others, labour is not well unionised, and abusive practices abound.

The exploitation of animals for their fur, leather, shells, ivory, etc., is another contentious issue. 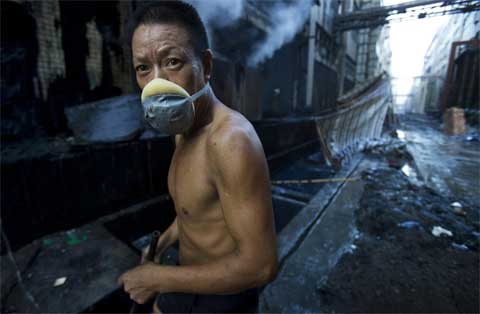 Workers at a denim washing factory in Xintang, search wastewater for stones, to create stonewash denim

No longer such a pretty picture, is it?

There are rays of hope, though; concerned individuals are beginning to effect some changes. In following blogs we will look at what is being doneto make the fashion industry more environmentally friendly, and

in the last one we will consider what each of us can do to help save the planet.

Nor any drop to drink.”

“….Water, water every where/ Nor any drop to drink.”. Lines from “The Rime of the Ancient Mariner,” by Samuel Taylor Coleridge.