Fashion at No. 10: Polished elegance to elegant defiance

While we were on holiday, the first post-Brexit shake-up occurred in British politics with Theresa May taking over from David Cameron as Prime Minister. Only the second women to hold that post, Mrs May will be subject to inevitable comparisons with the Iron Lady who went before, Margaret Thatcher, but for now, a lot of focus seems to be on the new PM’s sense of fashion and especially her love of leopard print shoes!

The previous female resident of No 10 Downing Street, Samantha Cameron, always appeared immaculately turned out, if somewhat demure. No wonder, as Mrs Cameron worked in the fashion industry as creative director at Smythson until 2010, and has been an ambassador for the British Fashion Council  since 2011. Even her casual looks were highly polished. As is to be expected, she chose to promote British designers, frequently wearing among others Roksanda, Christopher Kane, Jonathan Saunders and – her favourite – Erdem.

Some of Samantha Cameron’s notable looks: 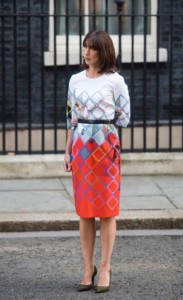 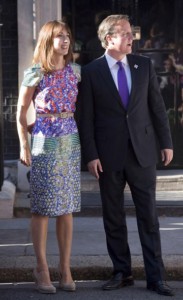 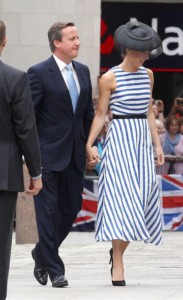 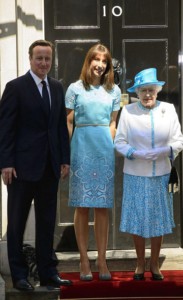 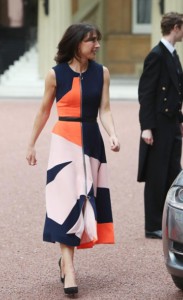 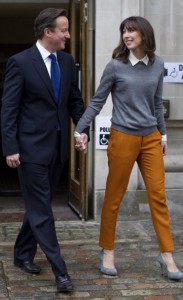 Theresa May also has a well-defined dress sense, but hers seems to be more adventurous if not slightly tongue-in-the-cheek. She loves bright coats, can pull off the “I can’t be bothered to get a jacket that fits”- look to perfection, and frankly it is hard to think of anyone else who can get away with a tartan Vivienne Westwood pant suit! Her interest in fashion was noted when she was photographed attending the LCF MA Fashion Design Technology Graduate Catwalk Show in 2012, wearing an eye catching patchwork jacket. 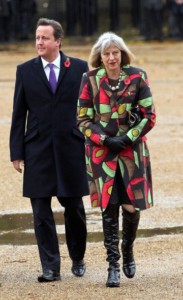 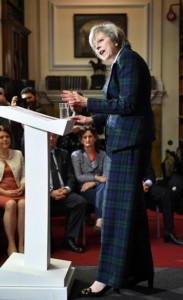 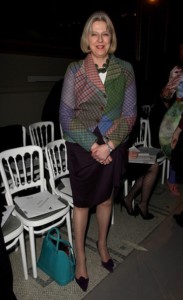 She is equally comfortable in dresses and trousers. At the final cabinet meeting under David Cameron, she wore a navy pant suit with a detailed collar, and to present herself to her Majesty the Queen, she chose a midnight blue dress and coat with lime green accent by Amanda Wakeley. 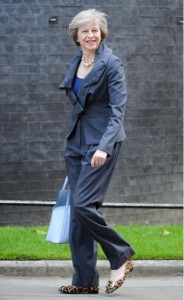 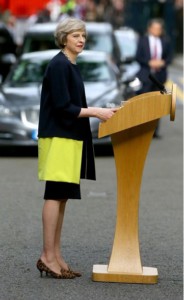 But the main talking point among fashionistas is the new Prime Minister’s footwear. She seems to own a number of styles featuring leopard print, quite a few bejewelled numbers, a good selection of boots, and even sequinned sneakers in a patriotic Union Jack design!

A former colleague has been quoted as saying, “she doesn’t mind wearing something other people wouldn’t expect her to wear. It’s not an attention-seeking thing, it’s defiant: ‘I know I have a brain and I’m serious so I can wear pretty shoes’.”

What is clear, though, is that British designers are going to gain welcome exposure through their new PM, while shoe lovers will constantly have something to drool over.